Cher Qin, Shuyuan Hung, John Jiang, and Kevin Koech, four juniors from the Wesleyan University, come home with a surprising win at NYU. After their return to campus, we sat down for a short conversation about their experiences.

Question: How did you come together as a team?
Shuyuan: there was an email out of the Economics department, from Linda [Mascaro], announcing the competition. I saw it and asked Cher if she’d like to join. Cher and I were always interested in cyber-security, since our sophomore year.
John: Cher asked me at Summerfields [dining hall], when we were eating together, if I wanted to join.
Cher: I knew Kevin from before and invited him to join. I also reached out to Sebastian Zimmeck [professor of computer science] for help with advertising this competition among other students. We are very lucky to have people from different backgrounds because Kevin is from computer science and we got to learn about various technologies, open source, et cetera.

Q: Is it true that CSS majors dream of changing the world? Or do they just dream big?
John: (laughs) Right now I’m just dreaming of getting an internship.
Cher: CSS really helps in analyzing the question. But we needed to decide which issue we will focus on in our study.

Q: Was it up to you to propose a field?
Cher: We each did research on a field and then came back and had a debate on which to choose. John was very interested in technology transfer.
Shuyuan: I was interested in consumer safety, ever since I learned about the Facebook and Cambridge Analytica case in the Econ course on anti-trust taught by Chris Hogendorn. Cher came up with the genetic information topic. We’ve decided to work on her topic in the end.
Cher: For every topic we have to decide the boundary between protection of citizens and benefits to the market. Genetics is a good topic because the boundary is clearly defined. Technology transfer and consumer protection are more broad. We did incorporate some of our ideas on tech transfer and consumer protection into the final policy.

Q: What was the competition process like for you?
Shuyuan: We did not expect to win anything, just thought it would be fun to participate. Before we learned that we made it into the finals, we worked for four weeks, spending 3-4 hours per week doing online research.
John: We did not have to travel anywhere [for the first round]. We just needed to submit a policy brief and a video.
Kevin: I had to research open source and genetic databases so we could put that into the policies and bring them together.

Q: Did anything change after you learned that you made it to the finals?
John: I realized that I am much better at policy writing than I thought. I guess it’s because I am interested in business consulting.
Shuyuan: We reached out to some of our professors. Cher did that. We reached out to Don Moon: he is a professor in the Government Department and he was our CSS tutor last year.

Q: What were your experiences from the final round at NYU?
John: I was very excited to see the New York University. I heard a lot about it being a non-campus.
Shuyuan: The competition is unique because there are many sides. There is the Capture the Flag [coding competition] and then there is the policy competition.
Cher: Shuyuan and I got separate rooms in the hotel, while Kevin and John had to share one. We think it’s because on the forms we marked “choose not to say” for gender and the organizers did not know how to place us. Having learned so much about consumer data protection, we did not want to give away that bit of information in the forms. 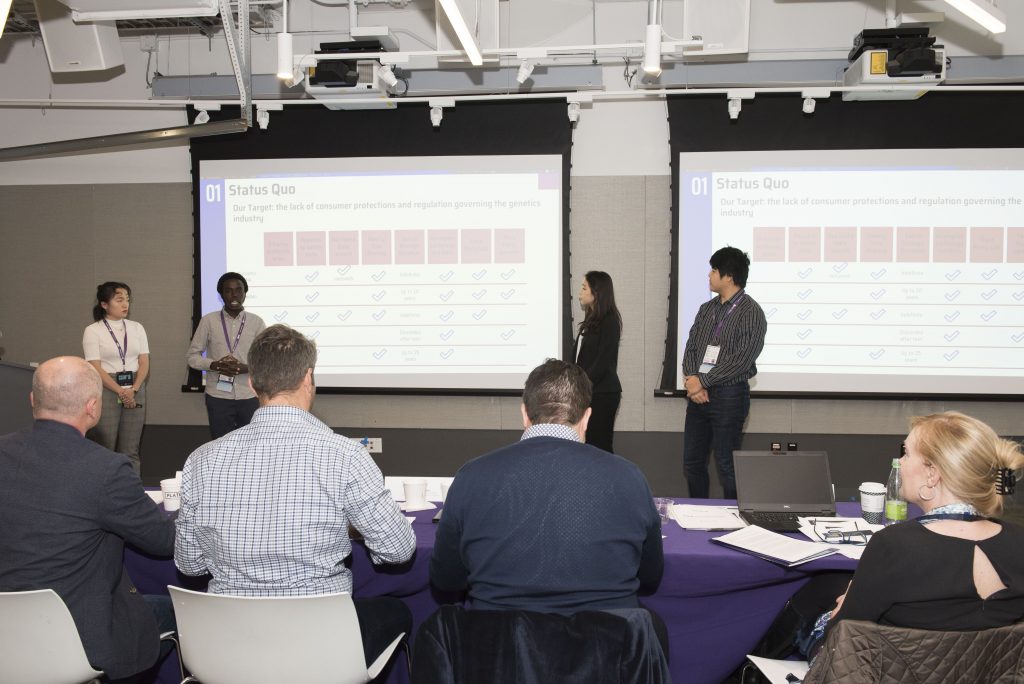 Q: So, you did not expect to win?
Cher: I was surprised that we won. I expected that it would be the Naval Academy. They had two teams in the finals and they brought a mentor with them.
Shuyuan: We did not expect that us, coming out of liberal arts university, would win, but having diverse backgrounds helped.
John: When they were announcing us, they said, “This team really proves the interdisciplinary nature of our competition.”
Cher: There was an expectation, which we did not realize, for us to be dressed more business formal, but we showed up dressed as tech formal.
Shuyuan: (laughs) We felt like hippies in that environment. But then we were saying, We are Wesleyan! 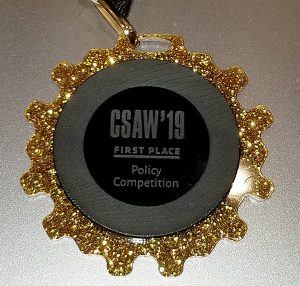