In 1994, a small company called Marvel acquired the rights to sell children’s toys and comic books based off of their characters. During this time they were riding the wave of the comic book boom, a time when comic book consumption and production reached a sudden high. Marvel entered this period of success with high hopes, and followed the lead of other comic book companies to find success. This follow-the-leader approach turned against them when the market collapsed in 1997, forcing Marvel to declare bankruptcy.

All of this happened before Marvel Entertainment was the media power house we know today. Now, it seems as if Marvel is expanding into every corner of product design, churning out movie and TV series with a built in comic book and merchandise market at such a pace that some are calling this Marvel’s Golden Age. This approach is startlingly different than the company’s mantra in 1997, leading many Marvel enthusiasts to ask themselves what has changed between then and now.

Wesleyan alum Peter Olson ’97 was hired by Marvel in 2004, the year before Marvel changed their name from Marvel Enterprises to Marvel Entertainment – a move that made their expansionist dreams quite clear. Peter’s main assignment was to re-launch Marvel’s website, in a hope that they could rebuild through better online communication with fans. But Peter knew that, in order to really reach their full potential, Marvel needed to become a business. While working there, he landed on a golden question for Marvel’s future: “How can we take Marvel’s data and turn it into something useful for fans?” One of the results that came from this line of thinking was a visualization of all the character relations in the Marvel Universe, color-coded by the major franchises. Shown below, each node represents a character, and the thickness of each edge correlates to the number of interactions between the characters. Peter was only a cog in a large mechanical shift within Marvel, but the thinking that led to the creation of this data visualization is very representative of the change that took place after Marvel’s bankruptcy in 1997 – they stopped thinking about how they could use their data to merely market products, and instead focused on a way to draw in customers by using their data for interactive and proactive design. 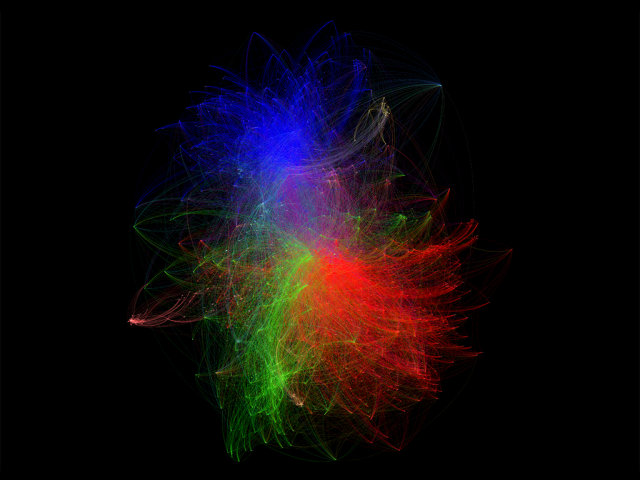 Twelve years later, Peter Olson has carried on with this kind of thinking and is now a design director and creative technologist at IDEO, a design and innovation consultancy. Still a fairly new kind of consulting firm, Peter described IDEO’s work as an intersection of data visualization and design. IDEO started as a company that made physical products (think Apple’s first desktop computer mouse), but they soon realized that, like Marvel, in order to really succeed they needed to think bigger. This led IDEO to come up with their own process of creation called Design Thinking: a method of understanding peoples’ needs and wants when creating something new. “Products exist in an ecosystem of services, which take place in a wide range of experiences,” Peter said about the background of design thinking’s fruition. “But experiences don’t exist in isolation either. [So] we look at organizations that help put things out into the world.” IDEO continues to expand their viewpoint to the very large systems that nurture these organizations, and how these systems contribute to movements as a whole. This is the exact form of critical thinking that helped catapult Marvel to success, and its importance is being realized by a whole slew of companies that reach out for IDEO’s help.

At the crux of its application, design thinking relies on data. As we descend further into this era of social media and big data, design is being utilized to think about the long-term impacts of technology. This allows data to become an essential piece in design’s toolbox. Design is not just design, it’s a way of thinking, and it is especially important in thinking about the future and how to use autonomous systems and machine learning in non-disruptive ways. This is IDEO’s goal, and they use taglines like “Creating positive impact through design” and “Technology moves fast, human needs change slowly” to get their point across.

The other essential element of design thinking is to have people with the skills to understand people and data in this way. IDEO has found that these are not number-crunching engineers, but the students streaming out of Liberal Arts schools. “Critical thinking is really hard to teach,” Peter explained. “Why you should do something is not something machines can figure out.” In line with IDEO’s thinking, many universities, including Wesleyan, have been pushing liberal arts education as the best thing for the future. In President Roth’s own words, “Liberal learning introduces them to books and the music, the science and the philosophy that form disciplined yet creative habits of mind.” Specifically, these goals have come into fruition through the introduction of engineering programs to liberal arts – and when people speak about engineering in liberal arts spaces, they are increasingly speaking about design. Wesleyan has continued to expand the ways in which engineering and liberal arts are mixed within their programs by offering more design classes. Currently they are all categorized under different majors, but it creates a possibility for a new major, minor, or certificate to house these courses.

IDEO is continuing to grow and, it seems, so are the liberal arts. And in an economy that fosters an uncertain job market, more and more students want to justify their liberal arts education with these applicable skills. What is uplifting is to see that this is no longer a choice that’s being made by students, but a pattern that has been noticed by schools and companies that has brought forth a new industry. Roth reiterates this point in his article, stating that “many liberal arts students become innovators and productive risk takers, translating liberal arts ideals into effective, productive work in the world. That is what a liberal education is good for.”