This article is inspired by and quotes from Weapons of Math Destruction by Cathy O’Neil, a book about O’Neil’s growing disillusionment with the data economy as she learned that data can be used to fuel toxic feedback loops. This post is the first in a series DataCrunch will be doing based on the examples cited in her book.

When preparing to apply to college, one of the first references that people often turn to are lists of college rankings. Almost every newspaper/journal has one – Forbes, Princeton Review, U.S. News. They are a big deal within higher education, with students and parents often referring to the lists as a point of reference when choosing where to apply. But the scope of influence goes beyond that. Alumni and teachers will also look at these lists to decide if they want to apply or donate money. These simple rankings of colleges have become somewhat of a bible in higher education that destines a school to fly or flop – all based on what their ranking is.

Does this sound scary to you? It should. It’s hard to truly understand the amount of power we give to these lists until you step back and look at how far the cycle of impact spans: The process of applying for college has become so much more than just “applying.” High schools will start prepping students their freshman year to be wary of their grades, ranked GPA, AP scores, extracurriculars, volunteer work, honors society, SAT scores, ACT scores…. And when high schoolers are stressing out about how much there is to do, they surely don’t think back to those college rankings that they started reading with your parents for fun. But the truth is that they are the center point of a vicious feedback loop that now controls our higher education system.

All feedback loops, vicious or not, start with data. Creating a rank list involves collecting data about all the possible participants and choosing which parameters are important. The main bulk of the work is data collection and analysis in order to craft an algorithm that can take in the data about a college and pop out a rating. The first newspaper to make a college ranking was U.S. News, and they started out by sending opinion surveys to university presidents. After the first list, universities who weren’t rated highly complained that there were many more factors that needed to be involved. So the network expanded to include factors “that seemed to correlate with success,” (52): SAT scores, student-teacher ratios, acceptance rate, alumni contributions, graduation rate, etc. This made college’s happier, because these were clear-cut factors that they could nurse and built. But this also made the model become really dangerous, as it was relying on easily manipulated standards, self-reported data, and ultimately created a self-reinforcing cycle. 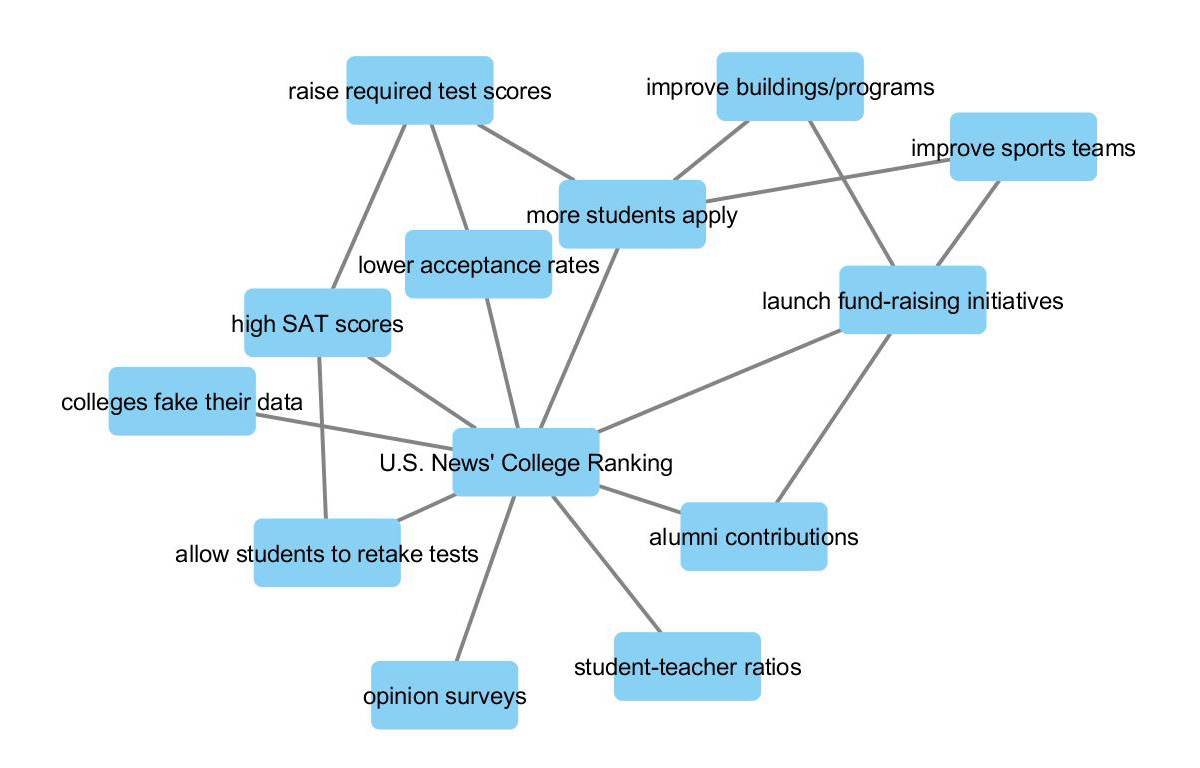 Above is a visualization of the feedback loop created by college rankings. In truth, the toxicity expands even beyond this, because once people ushered through this system graduate college, they are prepared with the tools to continue to manipulate and use data in this way, “forming a mutual admiration society,” (48). Within the loop of high rankings and artificial improvements to schools and students creating a rat race, we have created a larger, self-sustaining feedback loop of this process at large. In other words, from this college system come desperate hungry graduates that are prepared to do just the right kind of data work to keep up the artificial ratings and test scores and allow the system to continue.

Our higher education system is a weapon of math destruction. There’s no room for this college ranking algorithm to grow. This can be seen by the fact that these lists are still used as reputable way to choose schools. It forces us to all shoot for the same goals and all barrel down the same narrow hallway, and meanwhile “The real world, with all of its messiness, sits apart,” (48). If we all shoot for the same goals, then the importance of those goals will inflate and the chances of achieving them will shrink. It creates a herd mentality instead of one that focuses on individuals. That’s another flaw of data – it’s impossible to program understanding of individual circumstances into an algorithm. It’s destined to live in the past, and carry that on to the future. The college ranking system is toxic, and has created the rat race to success that we have all experienced and continue to experience today. This hits close to home, especially for students who fought to work the system and get into an elite school, and have since found themselves struggling under the work load, hating where they are, questioning the system, or realizing they need an outlook adjustment.

On a personal note, I’ve written about the dangers of a workaholic culture many times but never from this angle. I’ve always spoken about it in descriptive, theoretical terms. And while words and stories are powerful, there is something even more chilling about looking at it from this side. Data is thought of as real, hard, and calculated. And yet, this is an example of it being molded and used to fuel a dangerous cycle. Sloppy semantics pushing its way into data means that even the scientific isn’t immune. And as our data economy continues to grow, and as the definitions of certain words (such as value, productivity, elite) start to change, this shifts the meaning of previously innocent data studies into destructive ones. It’s scary because I am sitting here writing this article as an assignment, and knowing that I need to finish it soon to move on to my other assignments. The temptation to be sloppy is there, the temptation to type my sentences at max speed so that I can then move on. But I have to remember that even one exaggeration is powerful, a sort of Butterfly Effect.

So, please: Don’t wield formulas and words to impress. Don’t shame yourself playing into the system in high school, but move forward understand the consequences of your actions then, and how you might want to move forward once you are out of the system.